I’ve spent more time with ancient Greek and Roman authors in the last couple of years than I had in my entire lifetime (dissertation research). I didn’t study Classics in college—looking back I wish I had—so my knowledge of Greco-Roman literature was seriously minimal. Even now, several years in, I’m still barely a novice, if that. Anyway, one of the challenges of working with ancient sources is placing authors in their proper contexts, one of which is their historical milieu. Information about these authors and their works are plentiful to be sure, but one reference I’ve found tremendously helpful is from the folks at Harvard University Press—a timeline of ancient Greco-Roman authors.

If you’ve worked in Classics or are even a casual reader of the Loeb Classical Library, you probably already know about this. I found it helpful to have, so I thought I’d share it. 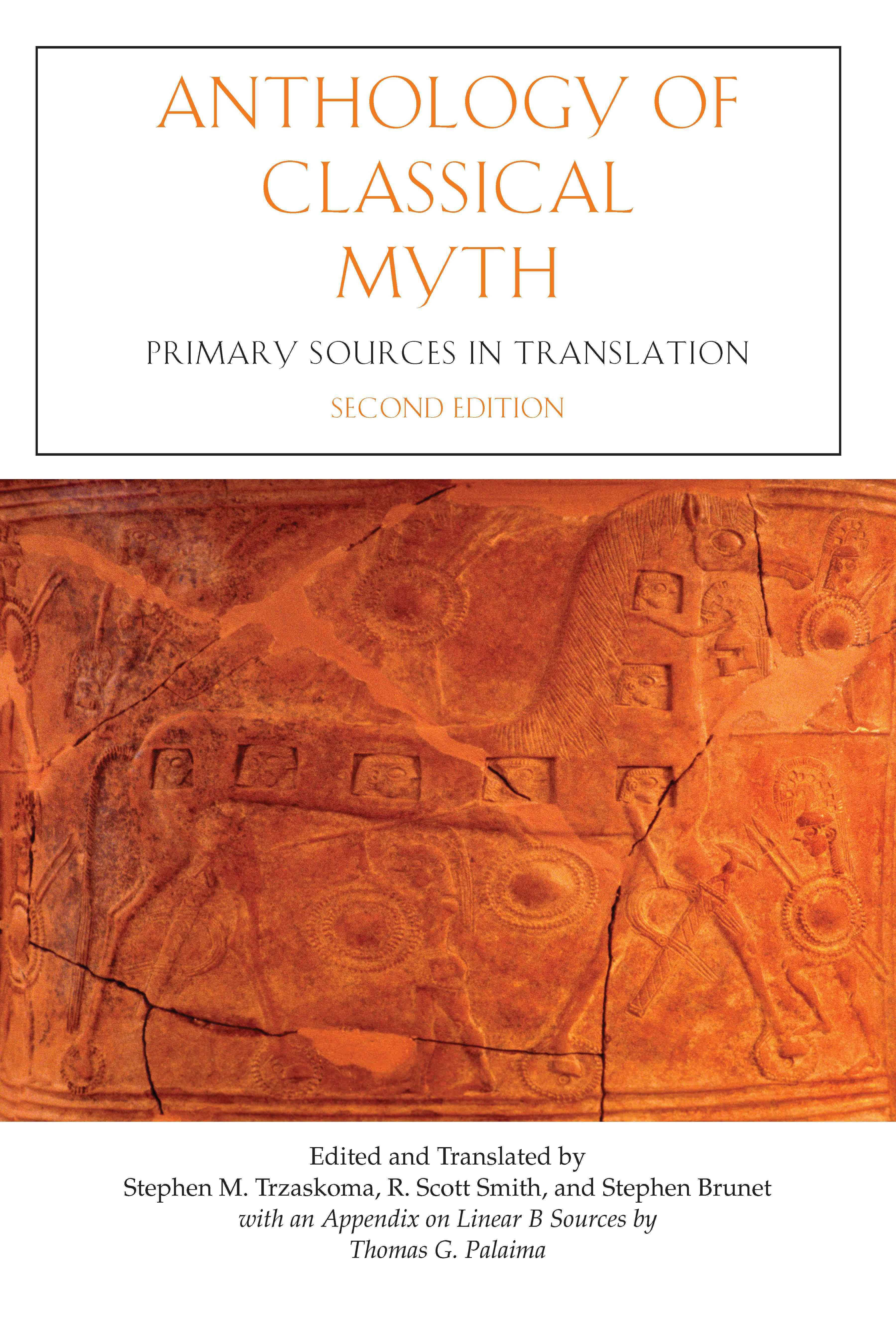 Many thanks to the kind folks at Hackett for this review copy!

Classical mythology—is there a more fascinating and entertaining body of literature? That was a rhetorical question, but there is an enduring fascination with the stories and myths of antiquity, both from academic and popular-level perspectives. From childhood, I can remember watching really bad adaptions of classical accounts of Hercules, Medusa, Jason and the Argonauts, and simply being enthralled by what I saw (though it was pretty terrible production wise!). That fascination has followed me well into adulthood as I am continually intrigued by the tales of old, particularly those of ancient Greece and Rome. This is partly due to my research interests and my years of doctoral work have allowed me opportunities to delve into the myths of old and see what insights they might yield for understanding biblical texts and concepts. When I saw that Hackett was releasing a second edition of their Anthology of Classical Myth, I was delighted. I had consulted this volume before for research purposes, but I really wanted to get a copy just to enjoy reading. Naturally, reading of this sort, for me, is done (at present anyway) with an eye toward information relevant to my dissertation, so my desire for the volume was greater than usual.

All that to say, this is indeed a splendid volume! Last year I read Carolina López-Ruiz’s (ed.) Gods, Heroes, and Monsters: A Sourcebook of Greek, Roman, and Near Eastern Myths in Translation and thoroughly enjoyed it. This volume, edited by Stephen M. Trzaskoma, R. Scott Smith, and Stephen Brunet, functions in much the same way—it’s a collection of popular myths primarily from Greek and Roman sources, though there are selections from other Mesopotamian cultures, classic creation accounts such as The Epic of Gilgamesh, Atrahasis, Enuma Elish, the Hittite Song of Emergence, and the biblical book of Genesis (most of the primeval history, chapters 1–9). Also included are appendixes that are chock full of fascinating texts gleaned from Linear B sources, papyri, and inscriptions (appendix four is where the ANE myths listed above are included).

When putting a volume like this together, one has to wonder what principles guide the process by which the included accounts are selected. The editors state from the outset that many of the entries were chosen because “they provide an overview of important details about major myths or mythical figures” (xxv). Readers will indeed encounter some of these important writers/thinkers from antiquity—Aeschylus, Apollodorus, Homer, Plato, Euripides, Hesiod, Ovid, Lucian—and a host of others whose stories have not only kindled the fires of imagination of their own times, but whose legacies have left an indelible impression on the landscape of Western civilization. Additionally, the editors have chosen material that would “complement or fill gaps in the standard textbooks” that are frequently used in introductory courses on classical mythology (xxiv).

The editors have also provided useful preliminary discussions in the front matter—brief essays on ancient approaches to myth, e.g., philosophical, rationalizing, and allegory, as well as myth and religion, and gender (xxvii–xxx). There are several maps of the ancient Mediterranean, illustrations of the Greeks’ conception of the world (including a sketch of the underworld based on Vergil’s account in Aeneid 6), a genealogical tree of the Greek gods, and a timeline depicting when the included authors penned their works (those whose dates of origin are uncertain are noted as such). From this point, the remainder of the book is dedicated to the titular material—the myths of ancient Greece and Rome.

Entries are arranged alphabetically by author, not chronologically as I expected. While I would prefer a chronological arrangement, I certainly understand the reasoning in arranging alphabetically—it’s simply easier to navigate. Each entry provides the name of the author, the date range during which that author wrote, the language in which he wrote, and a brief overview of the author himself and of the work that follows. Naturally, some entries are much longer than others, e.g., the first entry is an excerpt from Aelian’s Historical Miscellany, which is only three pages, whereas the entry for Apollodorus spans sixty. This is primarily due to the extent to which each author’s works have bearing on myth/mythology, so someone like Apollodorus would naturally take up more space (the same is true for Hesiod and the Homeric hymns). I would also say that while I am certainly no classicist and do not have (at present) facility in non-Hellenistic Greek, I can say that these translations are wonderfully readable maintain the air of classical writing—it feels ancient and modern simultaneously.

As noted earlier, this volume boasts a substantial series of indexes—150 pages of additional information. The first four indexes cover sources that have been discovered in more recent memory—Linear B sources, inscriptions, papyri, and near Eastern myth.[1] There are also indexes that cover names and transliterations (since Latin names often differ from their Greek counterparts, e.g., Heracles/Hercules, Odysses/Ulysses, Zeus/Jupiter, etc.), and index/glossary that lists the major authors, characters, and works found in the volume.

As one whose interest in classical mythology is both academic/research related and purely for the enjoyment of reading ancient stories, this book really satisfies both perspectives. I can imagine if I were a professor teaching classical mythology to uninitiated students, this would be required reading. Not only does it cover a broad spectrum of classical works, but it does so in a manner that is accessible for readers of varying levels of interest and knowledge—I highly recommend it!

[1] While myths of the near Eastern world have long been known through discovery, the editors here refer to the dramatic change in the way these myths were understood based on the work of deciphering discoveries from “cities, monuments, and texts from…Egypt, Mesopotamia (Iraq), Anatolia (Turkey), Persia (Iran), and the Levant (Syria, Lebanon, Israel, and Jordan)” from the mid-nineteenth century and on (437).

Over the last couple of years, I’ve developed an interest in classical literature. Many of the stories I’ve known about for much of my life (Homer’s epics Iliad and Odyssey, Plato’s Republic, et al), but I never really cared about nor appreciated them until more recently. I’m fascinated by the ancient worlds of Greece and Rome and I happen to love epic movies, so I wonder–what are the best ancient stories/classics that have been made into film?

I remember seeing some movies of this sort when I was a kid, but film production has come a long way since then. Surely some of those stories have been made more recently?! I saw that The Odyssey was made back in the 90s, so that might be ok, but who wouldn’t love to see both of Homer’s epics done by Peter Jackson Lord-of-the-Rings style?!? Now that would be, to put it in the well-worn youngster vernacular, epic! (see what I did there?)

Let me know what I’m missing!

Today’s Reading from the Ancient World