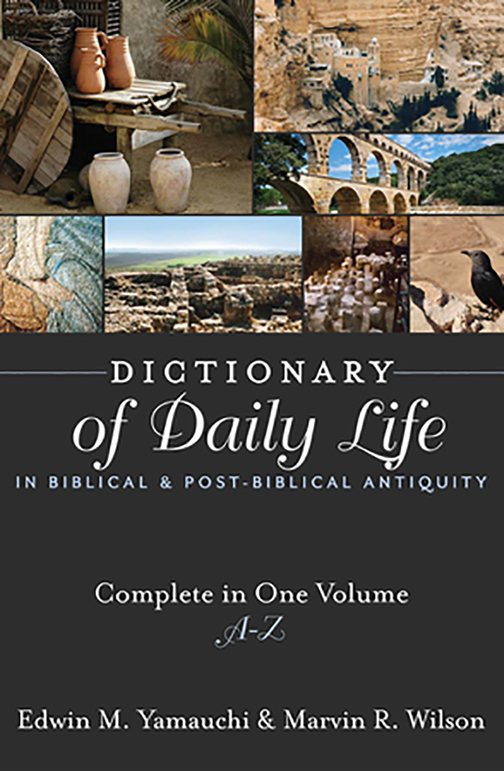 A couple of years ago, the good folks at Hendrickson published a multi-volume work entitled Dictionary of Daily Life in Biblical & Post-biblical Antiquity (hereafter DDL), volume two of which I reviewed here. After what seems to be a warm reception of the series, Hendrickson published the previously separate volumes in a one-volume edition, a decision I (for one) am glad they made. Having reviewed only one of the previous volumes, I couldn’t speak for the whole series (though I’m sure each one had its strong and weak points). However, this all-in-one edition has allowed me to read through a broader selection of topics (even though each volume covered numerous topics) with a slightly better sense of the contents.

Given my own proclivities towards background studies, this series was a welcome one. Indeed, I felt it would be a welcome addition to the already burgeoning body of literature available. However, this particular work fills a niche that is part of the world of backgrounds, but still deserves its own treatment. As editor Edwin Yamauchi notes, “the Bible, as received, recounts events in the lives of individuals, tribes, and nations…” (emphasis mine; xii). It is this aspect of background studies that has recently grabbed my attention and this volume provides a wealth of information on various aspects of every-day life, many of which receive only scant attention in other comparable works.

As I noted in my previous review, the primary way in which this series differs from others is its focus—on the daily life of the peoples of antiquity. So, while matters that are pertinent to the bigger picture of the biblical story may still show up, they are only addressed as sub points, so to speak. In other words, they are only mentioned as connections to the primary socio-cultural feature the article is about. However, these matters of connection to larger themes of the biblical story are by comparison minimal and quite brief. There are no lengthy discussions of religion, temples, sacrifice, etc. If such issues do show up, it’s only minimally. And I would also like to note that the length of discussion for many topics is somewhat related to the relevance of that topic to the various contexts in which it relates to the biblical text (these contexts will be mentioned below). For example, the article on milk and milk products (1193–1207) offers but a single paragraph about milk and milk products in the NT. Why? Because the term “milk” (γάλα) simply doesn’t occur that frequently and most of the uses are figurative in some way.

The articles are written by experts in their fields but are written in very accessible prose so that the reader might receive the maximum benefit. Each topic is discussed in overarching contexts—scriptural (Old and New Testaments), which is followed by the cultural (Near Eastern, Greco-Roman, Jewish, and Christian)—thus providing the reader with a wider range of backgrounds against which to understand that particular issue. Within each of these sections there is brief discussion relevant to other sub-contexts, e.g., political, socio-economic, religious, etc. For example, in the section on barbers and beards (sure to appeal to the hipsters among us!), Marvin Wilson discusses the matter in the above-mentioned larger contexts (scriptural and cultural), but conveys how haircuts and beard cutting/shaving were important socially and religiously, information that is not always obvious when reading texts, especially in isolation from these assumed contexts.

While each topic is addressed at generally similar lengths, some obviously will be shorter/longer than others. And for those who wish to read beyond the DDL, each article concludes with a substantive up-to-date bibliography.

One feature that I appreciate in this volume is the fact that the authors took the time to include, at least, parenthetical references to the ancient works they cite. It seems a given that any work that like should require its contributors to do this, but there are surely occasions in which editorial constraints prevent the inclusion of copious references and notes. While there are no notes to speak of here, the reader does have references to primary sources, the consistency of which is dependent on the particular contributor. Also, the references, likely due to the aforementioned restrictions, are not numerous, but do provide a starting point of sorts.

More technical series (ABD, IVP’S black dictionaries) offer insight into all aspects of the biblical world, particularly those issues that were more pervasive socially, e.g., imperial cult, agriculture, religious praxis, etc. The DDL, however, places the focus on aspects of life that were perhaps not central to the texts that reflected the culture. Ed Yamauchi, who both edited and contributed to this series, cites the issue of abortion as but one example of a practice that was pervasive in the ancient Mediterranean, yet is not addressed in the Bible (1). This particular volume covers such matters as dentistry and teeth, doors and keys, food consumption, heating and lighting, and horses, along with a number of other aspects of daily like that are perhaps more expected. As Yamauchi correctly points out, the authors of the Bible took for granted what was well known to themselves and their audience, thus they had no need to provide all the requisite background information to understand what they were reporting (1). As such, we must comb the sources of the ancient world in order to understand their world and thus better understand the context of the Bible. However, outside of academia, most readers of the bible have neither the resources nor the skills to mine the depths of ancient sources, so works like DDL demonstrate their ultimate value.

There is really nothing to dislike about this series, save for the use of transliterated terms from the languages of the sources cited and otherwise noted. This negligible element aside, the DDL is a solid work, one that will benefit both scholars and non-academics alike. It goes without saying (but I’ll say it anyway) that no, it is improbable that anyone reading these volumes won’t find something they disagree with. However, this volume is well researched and lucidly written, so even in disagreement readers will learn with great benefit. Will this volume replace others? No, and it isn’t meant to—it’s a supplement to previous works that will greatly aid in the study of the world of the Bible.

View all posts by Jason

Today’s Reading from the Ancient World